In between the odd April snow shower flower buds are bursting and the bees are buzzing; nature is waking up. Staying local means you have hopefully found new affections for exploring the many wonderful greenspaces in and around Bridge of Allan.  Maybe you have wondered what these creatures are, how they have fared during the pandemic and what the future holds for them.

Last week we had two new bus shelters installed with Green roofs.  Although this is only small in area, it shows a willingness to add biodiversity features to urban infrastructure.  I look forward to seeing how the roofs evolve and what insect visitors arrive.  We have some lovely flowers out now, essential for early flying insects looking for nectar and pollen. Butterburr flower spikes are poking out along the path by the river in Haws Park.  Lesser celandine carpets of juicy green leaves and bright yellow flowers are all over Mid Wood and the Darn walk.  The white flowers of hedge garlic are out in many places now and those of wild garlic are about to open up, you can’t miss the garlicy smell walking along the Darn Walk. 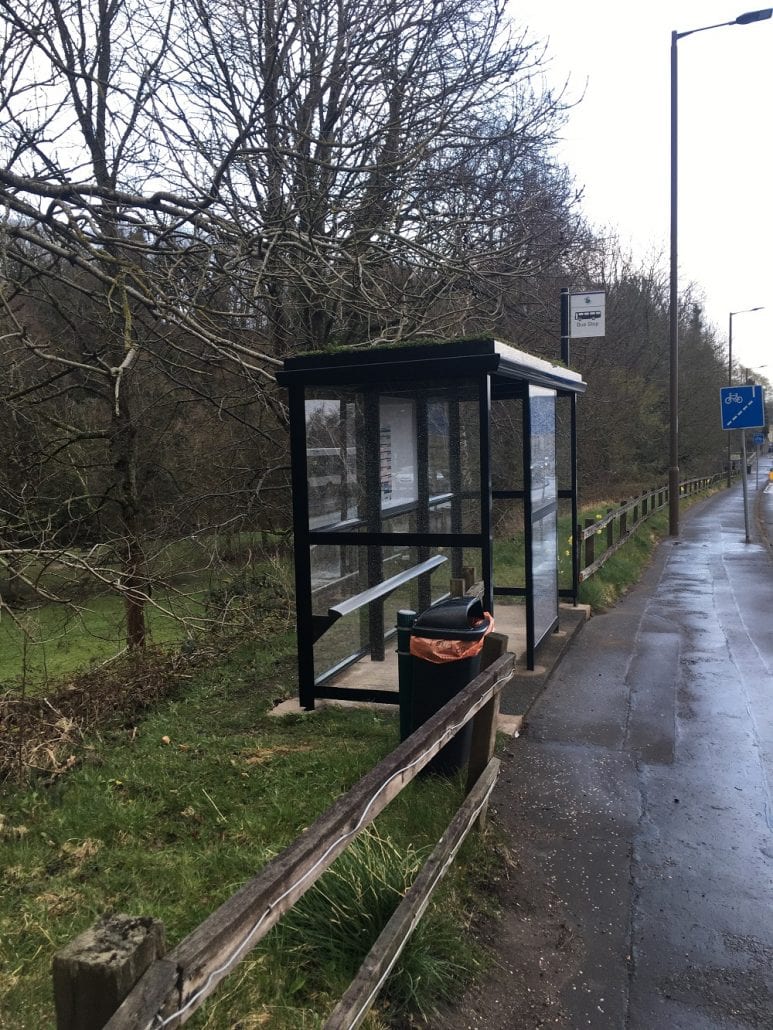 A few members of our community have been in touch to voice their concerns about the insect population, highlighting the threats insects face such as insecticide use and loss of habitat.  There are many things as individuals and communities we can do to help insects.  You can collect information about your sightings, adding them to national records using irecord.  Last week I found a large bumblebee on my windowsill.  After a bit of searching on the Buglife and Bumblebee Conservation websites I determined it must be a Buff-tailed bumblebee, and a queen due to its large size.  And now I can’t stop spotting these huge fuzzballs hovering over the woodland floor and garden shrubs of Bridge of Allan.  Later in the year I usually have Common carder bees nesting under a mossy patch in my lawn, they are a joy to watch, tirelessly gathering food and cause me no bother. Buglife’s B-lines project aims to create and restore at least 150,000 hectares of flower-rich habitat across the UK.  Bridge of Allan is identified as a B-Line corridor.  I’m not aware of any B-line specific projects happing in this area, perhaps contacts at our local Wildlife Trust group might be able to let me know.

In September 2020 I watched a representative of Stirling community project On the Verge present their petition: Keep the Wildflowers of Stirling Blooming to the Environment and Housing Committee.  During the first lockdown due to the pause in council teams out cutting grass verges and other areas, wildflowers had thrived as had their insect visitors.  The argument to reduce mowing was a win-win for the budget and the environment.  Following this in October Stirling Council announced that a new Pollinator strategy will be developed to help wildflowers flourish and support the lives of bees and other pollinators.  We will see some of this implemented in Bridge of Allan with mowing of the grassy area between John Murray Drive and Ferniebank Brae reduced to a single cut in late Summer/Autumn and a cut and collect method adopted if possible.  This will allow the wildflowers to bloom and set seed, removal of the cuttings overtime will reduce the fertility of the soil, tipping the balance in favor of the wildflowers over the grasses.

At a more strategic level Stirling Council has recently released its draft Climate Emergency plan for consultation on the new Engage platform.  This is a draft plan, so do let the Council know your views on it.  The consultation is open for comments until the 4th of May.  There are also two dates where the Sustainable Development team are presenting the plan, with an opportunity to ask your questions; these are 5-6pm on Wednesday 14th April and Tuesday 20th April.  The plan is structured in 5 key areas: Energy, Transport, Resource Efficiency, Nature and Biodiversity and Climate Adaptation.  It sets high level targets and objectives for each of these themes, many in line with the Scottish Government’s target of reaching net zero by 2045.  The details of exactly how all the aims and objectives of the plans will be met are still to be drawn up using individual Action Plans for each key area.  These plans will be developed over the next 5 years with the “Alive with Nature” plan the first to be released in early summer of this year.

Schedule for the development of Action Plans to deliver the Climate and Nature Emergency Plan. Source Stirling Council.

If you have ideas for nature and biodiversity projects or want to share your local nature sightings, please do so in the comments below or via our social media channels.