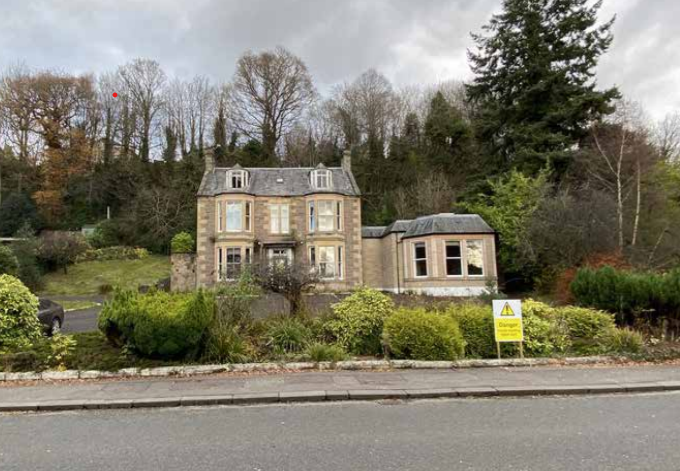 The team behind a planning application for a new care home on Henderson Street met with the Community Community Council on the 28th of July to present the new plans and their approach to the new development.  They were kind enough to allow us to record this to share with the wider community.

After the presentation there was some discussion as we had questions about parking, garden space, footprint and style of the building.

Design doesn’t appear to be in-keeping with the Victorian aesthetic of the area, eg not continuing the slate roof as used in the old hotel. Glass atrium and protruding fins also seem to be a modern style and L shape of development will impact on the view along Henderson Street

The architect showed the streetscape view and indicated that the intention is to pick up the ‘rhythm’ established by the pattern between glass and wall on the ground and first floors.  The vertical lines are to pick up the features of the chimneys on the existing buildings and there is a challenge to fit in with such an eclectic mix of buildings already on Henderson Street.  It is the intention to design a building of ‘our age’ and not to copy the prestige of the existing villa.  The grey cladding could be textured to match the slate, however there may be commercial constraints in this regard and the reason it can’t be slate is because the roof is vertical and not sloped in order to allow for the third storey.

Then fins are modern, however it is deemed to be an architectural statement.  The hotel sits way back from the building line and the new building will sit even further back to allow for more green space in front of the villa.

The scale of the development was mentioned during the presentation, how will it be addressed?

The current proposals address all issues the planners levelled at the initial designs, for example the plan was originally 70 beds now reduced to 60 and the scale concern is addressed by keeping the two buildings visually separate.

Managing parking demands has been a problem in BOA – this is a 60-bed premises with plans only for 19 spaces with 2 disabled.  Is this adequate given the number of staff and where are they likely to park?

Response: Linda Meston confirmed that 20-24 staff members may be present at full capacity however, based on experiences in other homes, no more than a handful of employee vehicles are anticipated to be parked on the site.  This would allow approx. 15 spaces for visitors, again based on experience this is not expected to be reached because people can visit at any time and their numbers are often sadly low.

Rick also advised that the working patterns are split over three shifts and the parking allocation is commensurate with Stirling Council’s guidelines.  There will be a green travel plan and a transport & access statement with the planning application explaining how the applicant intends to meet the expected standards – there will be strict controls around deliveries for example.

How will the two existing buildings be incorporated? Are there plans to demolish parts or will the whole of 105 be removed?

Response: Murray confirmed that 105 is beyond repair given the structural reports, the façade of 103 will be retained however the rear will be altered to re-instate the original building by removing the additions / extensions that have been added over the years.  This is important as the desire is to retain the listed building and ‘wrap’ the new building around it so it is less prominent.  The new build elements on either side are set back to give the villa pride of place.

There doesn’t appear to be much outside space, and is it only accessible to those on the ground floor?

Murray indicated that the ground floor rooms will have access to their own private garden space and communal green spaces will be established on the east wing.

Linda also confirmed that the CGI imagery is not indicative of the gardens, and these will be more fully landscaped in a separate document to be submitted with the planning application.  Whilst residents will always be encouraged to go outside but there is an expectation that many people who will reside in the building are likely to be end-of-life or are otherwise reluctant to go outside.

Water seeping down the hill has been a problem at other properties on the street, how is this potential concern around draining and hydrology being addressed?

Response: Derek has walked the site and observed no evidence of ground water or erosion from the higher sites.  The groundworks involved will include protections as necessary; drainage calculations are comprehensive, and the design process requires input from engineers as well as compliance with regulations.

Integration with the Community

It was mentioned that the care home would be accessible to the community; can this be clarified for example, would they consider supporting the local Changing Places toilet project.

Linda indicated that they would be open to discussions, however, need to be mindful of the care inspectorate requirements.

Our planning lead Iain consolidated our comments and sent these back to the development team.

We do feel that the revised proposal is an improvement and we are pleased to see that the Ivy building is to be retained. We would support Historic Environment Scotland in any comments they may have regarding the demolition of 105 Henderson Street.

Notwithstanding the above, we do still have a small number of concerns about the proposal. The first relates to the modern appearance of the proposed building. We feel that this is not in keeping with the conservation area and wider setting on Bridge of Allan‘s main street. In particular, the fins that we understand have been included to reflect the shape of adjacent chimney stacks, actually make the building appear more contemporary.

In a similar vein, it is our opinion that the use of cladding instead of slates for the section of the third floor which is meant to look like roofing is inappropriate. These sections of the third floor appear boxlike in comparison to the pitched roof of the existing Ivy building. We are not confident that the two will sit side-by-side harmoniously.

Finally, we feel that the overall proposal represents overdevelopment of the site. We would argue that this level of density is not in keeping with neighbouring properties and the wider conservation area.

The planning application is curently live on the Stirling Council Planning Portal with the reference 21/00703/FUL. Here you can see all the designs, drawings and reports associated with the application.  Leaflets are also being delivered inviting your thoughs and comments to be sent to David david@davidcoutts.scot or by phone 07483812259